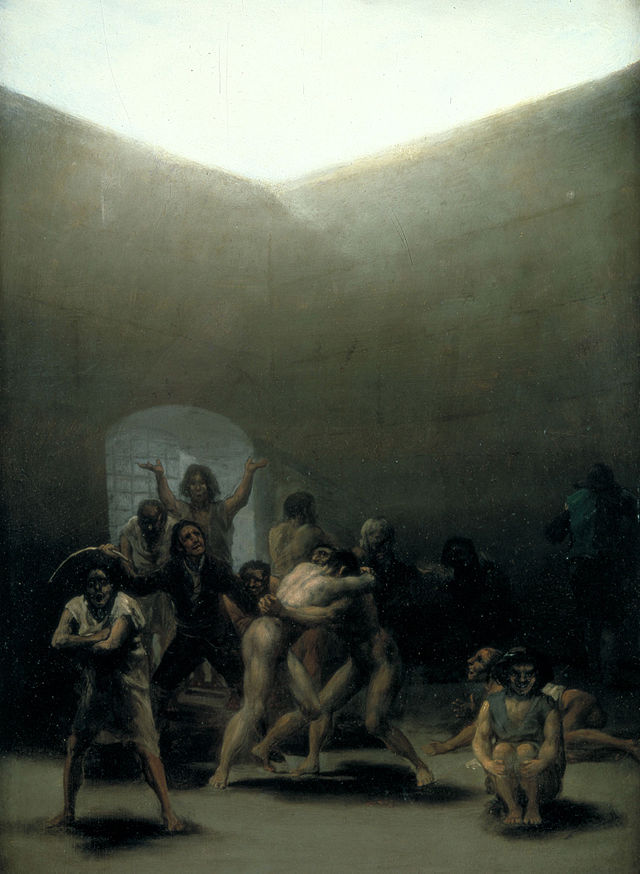 The following is an excerpt from my newsletter, The Unhappy Man.

“Like love, ideology is blind, even if people caught up in it are not.”

We face the pressure of meaning. Camus was right when he said, “Man stands face to face with the irrational. He feels within him his longing for happiness and for reason. The absurd is born of this confrontation between the human need and the unreasonable silence of the world.” Our predicament lies not in the meaninglessness of the universe but that from all sentient beings, we are the only ones that yearn for meaning in this desolate place. If God created man not to desire meaning, then the meaninglessness of life wouldn’t be a tribulation. In that sense, God is more malevolent than we can ever imagine because he not only allows unreasonable suffering but even plays that loathsome trick on humanity by creating meaning-desiring beings in a meaningless world.

Therefore, our penchant for becoming ideologues, for finding psychic stability through the prescription and imposition of dogmas onto the world, is unsurprising. The profound unhappiness this Angst brings to our soul makes our capitulation to totalitarian ideologies (e.g., Marxism, Capitalism, Religious fundamentalism, etc.) understandable. Such facts of the human heart have to be acknowledged and dealt with ad infinitum. But on that lugubrious note, I ought to specify that ideology doesn’t intend to seek truth, nor does it increase human freedom. Ideology exists for its own sake, for its perpetuation; it’s a Sartrean nothingness. So I will ardently interdict my natural desire to make this newsletter a forum for ideological evangelism.

To write (or live, for that matter) authentically and non-ideologically is the strangest of all things. In many ways, it’s been the quintessential struggle to be an individual since time immemorial. And apart from authenticity being an existential predicament, modern society seems to hinder us from even raising questions about authentic living. For instance, contemporary culture reeks of the call for constant liberation, self-expression and bringing one’s “true self” to the world. Yet, as some Frankfurt School sociologists, namely Adorno, Horkheimer and Habermas, proposed, industrial, bureaucratised society allows us only to be free within the confines of the ruling ideology, and freedom itself is a tool used to coax an individual to submit to the establishment. They argued in the 1940s, popular culture does this best through the cultural goods of mass media, i.e. film, music, and commercialised sports that make people docile and passive consumers; for them, a true miracle would be if one of the NFL Super Bowl commercials said you don’t need another pair shoes to be happy!

Through this critical lens, even ostensible social justice messaging like the direct championing for liberation and equality is a facade for ideological control. Case in point: telling a woman to be a “Boss Babe” or a “SheEO” is simply the prevailing capitalist ideology telling her what to become. The establishment tells her to partake in a company that’s yet another overpriced fashion brand telling young girls to find their self-esteem and worth as an individual through owning some product leading to further exacerbation of the anxiety and insecurity we see in teenagers (especially girls) prevalent these days. Most of this happens subconsciously, unbeknownst to us, but vis-à-vis women’s empowerment. Adorno would ask how this would be true freedom? How does this allow an individual to be authentic? In Marxist parlance, he manages to bridge commodity fetishisation with reification, where such a woman has forfeited her inner freedom by committing to objects, i.e. fashion products, outside herself; she’s made the object a subject while relinquishing her subjectivity―this is the case only if the subject-object dichotomy is true, nevertheless, the existential point of losing ones innerness still stands. Such control is worse than the overt despotism of an authoritarian regime as, in our case, we don’t even know we’re being controlled and how our psyche is changing as a result of it.

Having said that, I doubt even being aware of this datum allows one to be truly authentic; if such a thing exists. For instance, Adorno was scathingly critical of contemporary Western culture and its concomitant cultural goods, especially the burgeoning Americanism with its Jazz music (No, that wasn’t a typo, he, in fact, hated Jazz!). Simply put5, he thought Jazz wasn’t true art but rather a banal commodity that chained people’s spirits to the capitalist machine. It was merely “aesthetically pleasing” in contrast to so-called “serious” art produced by “high culture” like Mozart, which penetrated and changed one’s soul fundamentally. In typical leftist thinking, for Adorno, true art makes us question our bland comforts, conformism, ignorance and subservience to the prevailing dogmas; art cannot be simply enjoyed for its own sake. Art ought to transform a man, bar none. As he states in Aesthetic Theory, “Art respects the masses, by confronting them as that which they could be, rather than conforming to them in their degraded state.”

But who’s to say that he, too, isn’t in this degraded state along with the rest of us. Perhaps Adorno is evading his true inner-self by indulging in higher culture and intellectual life where his authentic self never comes to light. Anna Freud expounds on this phenomenon in her psychoanalytic theory of defence mechanisms: she highlights how our unconscious uses a variety of defences (sublimation, rationalisation, intellectualisation, etc., to name a few) as an outlet for protecting our ego to avoid distressing, anxiety-producing thoughts and internal conflicts about our own life. So being an aesthete, immersing oneself in serious intellectual work, learning new languages, and travelling the world to experience cultures all seem like objects our subjective defence mechanisms exploit, no different from engaging in mindless consumerism or superficial capitalistic accumulation of wealth solely for the sake of accumulation6.

Kierkegaard elucidates the essence of this datum best in Either/Or, wherein, attempting to outline a theory of human existence, he intimates how we all inescapably live a transient aesthetic life; the life of celebrating constant change and titillation; the life of desire and sensuousness; the life of immediacy and aesthetic reflection. This is in contradistinction to the ethical life Kierkegaard’s Judge Vilhelm delineates in his letters to the aesthete, “For the person who lives aesthetically sees only possibilities everywhere; for him, it is these that form the content of the future, whereas the person who lives ethically sees tasks everywhere.” And yet, in his moral phenomenology, one could argue for a subtler reading to find that even the ethical—societal and civic duty—collapses to the aesthetic as it becomes motivated by self-fulfilment; to do good because goodness makes one happy is nevertheless one’s ethical passions in effect. And ultimately, the highest stage of life for Kierkegaard is the religious sphere, beyond the binary of the aesthetic and ethical. When one arrives here, an inner metaphysical phenomenon occurs; in his temporality, one makes an absolute unconditional commitment to the ground of all being that transcends logical reasoning, the prevalent ethics and social norms of the day. We see this radical transposition epitomised in Dostoevsky’s Crime and Punishment, where towards the end of the novel, the protagonist Raskolnikov simply accepts he’s wrong without any explanation, and perhaps we see this in figures like a Martin Luther King Jr., too; they’ve come in touch with a self-transcending deeper reality beyond coherent truth itself that’s scandalous to human reason.

Having gone on that tangential point, in the spirit of authenticity, I have to admit that I’ve never experienced this latter religious stage Kierkegaard writes of with such zeal—nor am I sure if I want to after having read Fear and Trembling. My life has been a constant oscillation between the aesthetic and ethical. Even reading and writing about the religious life is an intellectual thrill for me rather than a sincere expedition for truth. Kant wrote (paraphrasing), “If the truth shall kill them, let them die.” But then I wonder if any of us really seek truth? If truth made us miserable to the point of suicide, would we want it? The problem, as Nietzsche wrote, is that “no one has yet been truthful enough about what ‘truthfulness’ is.” This fundamental epistemic confusion will always make ideology attractive to us, and perhaps we can never abandon it. Perchance true authenticity lies in thinking less of being authentic, of trying to be in a particular “stage of life”, whether it be aesthetic, ethical or religious, rather simply discovering reality without expectations or suppositions—if such a thing is possible. Much like happiness, the more one thinks of being authentic, the less of one’s true self one becomes. Ergo, I will write non-teleologically, non-prescriptively but also not merely descriptively, as writing always has a point of view; a perspective. In that regard, I can only try to allow what I read and write to seize me rather than “I” trying to seize it.