Why Do People Believe the ‘Social Media is Mind Control’ Myth? 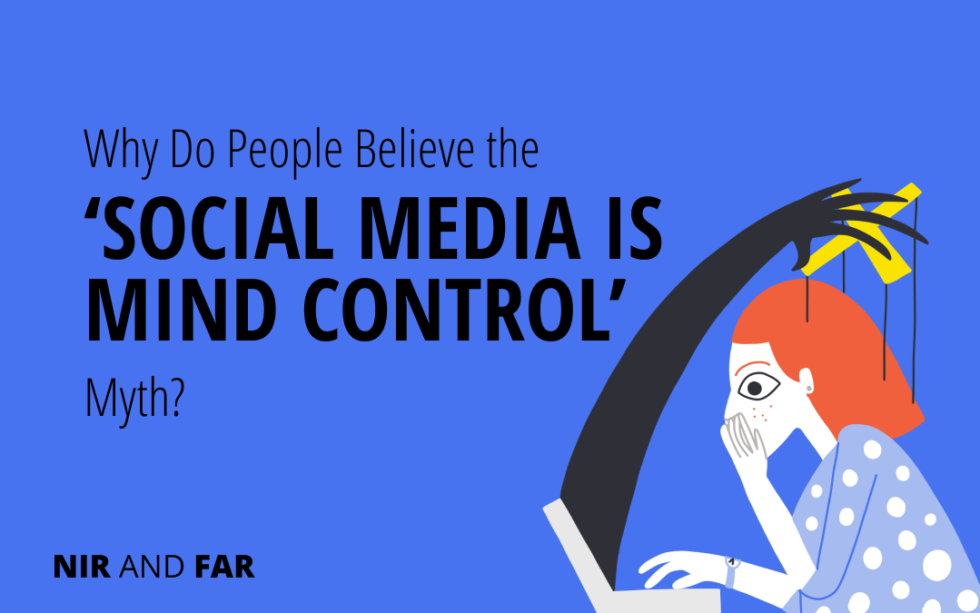 In our search for easy answers, we give up control.

As I’ve discussed in other articles, we need to give ourselves more credit. Instead of passively accepting the idea that we’re all being puppeteered by some sort of menacing tech bogeyman, we can hack back distractions.

To be clear, too much social media can be harmful. No one disputes that too much of all sorts of good things can be bad, whether it’s too much news or too much booze.

But the popular narrative that distractions, particularly those emanating from our tech devices, have the power of mind control lacks scientific support, and is more harmful than helpful.

It’s as if, for some reason, people want to believe tech is more powerful than they are. Why is that? Why do people so readily give up control and admit defeat?

Understanding why people reflexively give up control helps us better understand all sorts of self-defeating tendencies.

The story that something can control our minds is a tale as old as time. For thousands of years, the practice of trepanning (basically banging a hole in a person’s skull) was thought to release evil spirits that controlled a person.

During Prohibition, the bogeyman was alcohol–drink was said to take over people’s minds, rendering them helpless and making them do awful things.

Even today, domestic abusers use this excuse of having “one too many” to claim that they weren’t themselves when they landed that punch. They slough off blame and play the victim, saying they were under the influence.

Of course, the law and common sense don’t let people get away with blaming booze for their bad behavior. As we all know, the person should have known better than to allow themselves to do dumb things while drunk.

And yet, when it comes to other supposedly mind-controlling influences, like too much tech, we believe we’re powerless to resist.

Why the double standard when it comes to our gadgetry?

Techno-panics are nothing new–radio, TV, graphic novels, video games, even the written word were all said to control people’s minds against their will. While past technologies seem benign in comparison, it’s important to remember they were just as feared in their day as our tech is now.

Why is the “tech is mind control” narrative evergreen?

For one, there’s Brandolini’s law, which states “the amount of energy needed to refute bullshit is an order of magnitude larger than to produce it.” With so many unscientific claims about tech companies hacking our “lizard brains,” using “dopamine hits,” and “hijacking” our neural circuits, there is plenty of scary-sounding bullshit to reign in.

Once a story captures the public’s imagination, it’s hard to dissuade people with facts. Familiar narratives beget more of the same as traditional media companies keep the storylines (and clicks) coming. They use clickbait headlines like “Have Smartphones Destroyed a Generation?” to pull readers in. It’s hard for publications to resist, particularly when it’s a story their readers want to believe.

Deflection is easier than reflection

Deflection is a defense mechanism we use to avoid having to act on a problem.

In some cases, we deflect responsibility onto other people: we may point fingers and play blame games, finding all kinds of reasons why mistakes were made by other people (but not by us).

When there’s no one else around to blame–for example, if I skip a workout–it can feel soothing to deflect by thinking “I didn’t have enough time.” In reality, I wasted time by not sticking to my schedule. But it feels bad to admit that. So, I deflect. It’s not my fault; I just ran out of time! It’s easy to deflect responsibility away from myself onto the vague bogeyman of running out of time.

Similarly, there are lots of big, hairy problems in our society, and it’s easy to deflect responsibility onto a scary new technology. For instance, Americans are getting lonelier with each successive generation. While it’s easy to blame increasing isolation on our screens, the research reveals this is a long-term trend that started well before the invention of social media.

Complicated problems rarely have easy solutions, but deflection is so much easier than reflection so we tend to scapegoat rather than get to the sources of our suffering.

We trade power for control.

We deflect responsibility because we crave control, or even the illusion of control. As paradoxical as it sounds, it’s empowering to tell ourselves we’re helpless.

Once we decide that nothing can be done–that our minds are being controlled–we absolve ourselves of responsibility. The conclusion we reach is “there’s no point in trying to stop”–so overuse is no longer our fault.

By extension, anything I do while being controlled by an outside factor isn’t my problem. People leave nasty anonymous comments online for the same reason they might do horrible things while drunk. It’s not the drink or the app that told them what to do, but rather they give themselves an excuse to act like irresponsible jerks.

Of course, the problem with deflection is that it doesn’t actually solve any problems.

While social media companies certainly play a role in limiting antisocial behavior on their platforms, users must also step up. But if we allow ourselves to get seduced by the story that our minds are hijacked, it becomes true. We do nothing to change our behavior and wait for someone else to fix the problem.

The good news is we don’t have to trade in our power. We can realize that we ultimately do have control if we want it. We can take simple steps to ensure we control our devices as opposed to letting our devices control us.

Nir Eyal is the bestselling author of Hooked: How to Build Habit-Forming Products and Indistractable: How to Control Your Attention and Choose Your Life.

Get a complimentary Indistractable workbook at: https://www.nirandfar.com/subscribe-behavior-change/

Thank you to Nir for letting REALM republish this piece.